I prefer the look of chemical solarization. Not from some old school loyalty; not because it was from my first words, but because it is somewhat less predictable, and more often provides a better set of lines, tones mix.

I work with B&W by (Layer > New adjustment Layer > Hue and saturation) turn saturation to left removing color from the image.
Solarization is a bad curve shape, being negative in some tones, positive in others. Therefor in PS we need a curve layer (Layer > New adjustment Layer > Curves) Draw the curve as an inverted V. This results in an image that is solarized but probably needs small adjustments for denisity. To make these mods just make another Curves layer, then use as you would with other images– adjusting tones slightly, until the preview provides your “ahh” 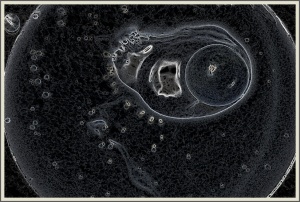 … alternate, or enhancement.
Since solarization is an ‘edge’ effect, why not increase that, or at least provide yourself with another option.
I take my work to this point and save it by:
(Layer > New > Layer).
then: (Image > Apply Image.) which copies everything into this new layer
next: (Filters > Stylize > Glowing Edges.) with width of 1, brightness around 5, ad smoothness around 3, I have a good clean line
The image will be white on black, so invert it (CMD + I.) set blend to ‘multiply’ … adjust opacity … apply to new layer (like we did above)… then you are done, or have a layer ready for other work–( often only DB)