your eyes point forward for a reason

How much emulsion should you store? How much film should you stock? Paper?
When I began, this was one of those business questions- economic order quantity. Now, it is a question about ending product lines. In 1970, we could impulse pickup film, or buy in bulk. Sheet film came in 50 or 500 sheet boxes, in addition to small 10 sheet sizes. Kodalith, Reprolith, etc came in 40 inch wide rolls. Dupont, Itek, Agfa made custom runs for some labs.
Currently, I shoot less film than just 5 years ago. And there are fewer choices, and rasons to use film. My method of determining film buys is to emphasize film from Ilford over Kodak. This is for black & white. 3 years ago I bought Kodak and stored it. I am working that down, and have no plan to buy anymore Kodak film.

The Answer I Had

How much film did you shoot last year? The year before? Are you increasing your shooting?
If yes, then buy at least as much as those 2 years added together
If no, then buy only the lower amount of those 2 years. 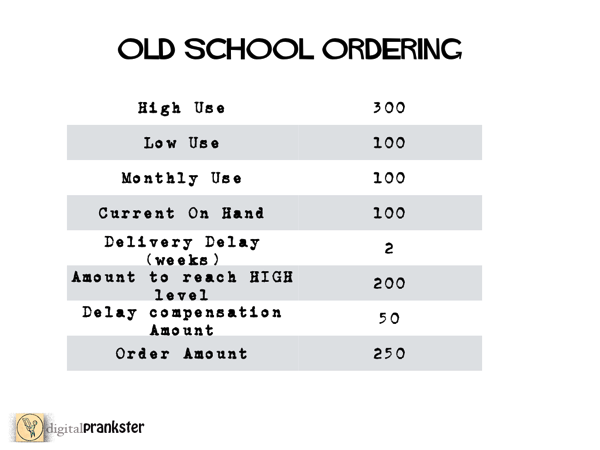 Note line 5 (delivery delay), this is the uncertainty in this day. Film is now subject to great fluctuations in supply, with increasing risk of persistent supply.

The large format folks can’t even gather a consistent $15,000 per year group purchase. The first special order took 15 months to be put together. I used to spend more than that as my yearly purchases. I spent $5k on my last Kodak order — only 120 and 220 rolls.

if a film you use is being discontinued, and its loss ends your shooting, sell the car, hock the silver; otherwise, save the box and move on.

order what you can store, and assume it is the last film you will use