The dispute being at the beginning was what made it matter; would the answer make it art.

PH or HP? High heels or Low heels at the dance.

Peter Henry Emerson (13 May 1856 – 12 May 1936) and Henry Peach Robinson (9 July 1830, 21 February 1901) were early photographers with divergent approaches to photography. At least they argued about it. Emerson, a writer who used photography to make records of birds, set the standard. He also came in after Robinson.

Emerson trained as a physician; Robinson as a painter. Emerson believed that the camera was the key to photography being distinct, therefore of value. He thought the camera was capable of science – that people in pictures should be wearing their own natural clothes. He also championed the mimicry of the ‘human eye’ – he taught that the camera lens must be made to reproduce human vision: sharp in the middle; blurring to the outer edge. Somehow, he missed the circular, upside down, etc. parts of human vision. But he was a doctor, not a philosopher.

Which picture is the ‘fake’ photograph? 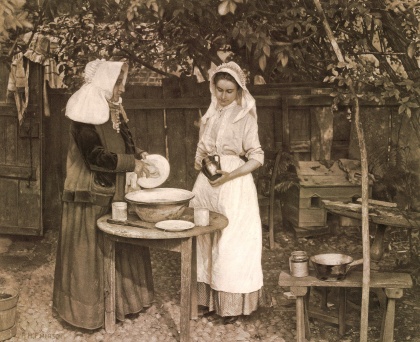 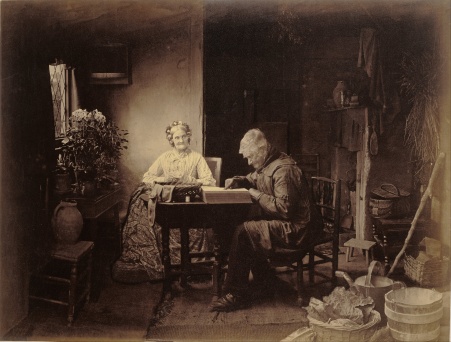 The one on the left is a ‘pitcher portrait’ “Confessions” by Emerson – It is the real photograph. The one on the right, “Day’s Work Is Done” by Robinson is a multiple print, so qualifies as a fake, drawing the ire of Emerson.

Even in 1970, student photographers considered the distinctions stilted, anachronistic, irrelevant to their artistic principals or image considerations. They are both attempts at story telling. The story being told is generic, well established emotionally without device. The frames are used similarly, the tone ranges vary, but not enough to be claimed as superior presentations of story or fact.

For those who know painting of the time you understand some of the relationships, as well as the morals being promoted by the photographers. These weren’t their invention, not even their discovery; they were following the same paths, but using different steps. And like so many people striving to lead to the same place, they argued about the better way. They couldn’t see how much alike they were.

They danced to the same music — one on the ‘stage’ of the camera; the other on the stage of the darkroom. One made a negative, the other made prints from many negatives. As if one shot a single camera one take, the other multiple camera spliced movie. Among aesthetically accomplished photographers both approaches are handled easily.

It is unlikely that either of these images would be shown as new work without expecting some smiles, grins or even laughter. Cast, and costumed differently you may get a show; but not an argument.

“The Human eye is not even centered, the magnitude of the corneal eccentricity appears to be quite irregular and adventitious, and so on.” — Helmholz