If only I could go, but that 4th dimension is still too hard.

Short: not worth the drive. No matter how short it is. Enjoy the space, and other work on display.

His opening phrase: where he starts; who is the ‘other’ of his world. Who am I to him?

First words raise the curtain, introductory speech defines the author; sometimes openings are a starting point, sometimes they set out the limitation of the artist.

The setup: in which Robert Langham categorizes the other as lacking knowledge: classified as first not understanding, therefor lacking something that he has, and values. This is a rejectionist stance. He characterizes me, an unknowing reader, so that as he ends her story by having her say: “how do you know?” he and she fall silent.

The conversation ends, falling off the page to a darkening room. Warm tones but cold words.

Can we judge the work by our expectation? Certainly, since that is what we all do. Some expectations are lower, even naive, as others are formed by formulations based upon viewing and interacting with increased variety of art worlds. However, seeing other work shouldn’t blind you to seeing any current work in view. You may miss something in expecting that, when what you have is a this.

His world is Wet Texas — Tyler to Houston.

Is this a this, or a that? What does it miss, or mistake? Why are the contents placed into frame? Since these are studio shots, done with view camera, all elements must play well alone and together. They seem built using the ready available, without aesthetic requirement or note. An airspace – use part of a clothespin. Light. Use the umbrella from the school senior shoot. Good enough. We’re saved because of details; we are using big film, so we’re automatically in art territory. 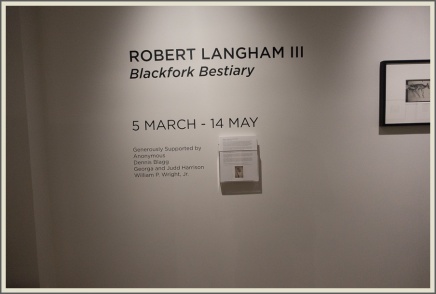 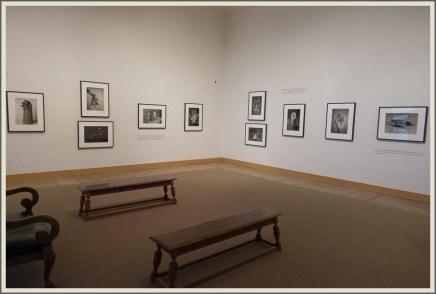 The art space as if a bar. Any gathering place bears resemblance to, and can be likened to, another. Art serves multiple functions. Its public function is as social point of contact, by which it is located and compared. It is presented to a public by gallery. Sometimes with an opening; with placards, catalogue sheets, along with other ephemera.

Video of installation at: https://youtu.be/XQAa3PjNujE

I passed through the show 3 times over a 45 minute time. During my visit, there were 5 other visitors in the OJAC. It was Saturday morning, opening day. Sitting on the bench to take notes, I was able to overhear some conversation. Mostly just remarks about the paintings just seen, but this: “dingy,” made me listen. One of the people talking was from Portugal and was talking about bestiaries. He had thought there would be surface adornment or gilding, because of the titles. Only that group spoke, otherwise the room was quiet; meditative.

Dingy? I had already written: “compressed, confined tonality” — The work is not an exploration of surface, certainly not if compared with work just a few steps away. Painters have to build a surface, so they, over time, have a mature approach to building up an image. Studio photography has similar history, but not in this presented work. The tonality is a monotone – if you were to see these online (no reason not to ) they may remind you of tintypes.

Since the work has accumulated over a protracted period, this printing must be by choice. What isn’t present is use of this chosen grammar. I am tempted to provide one, but won’t. 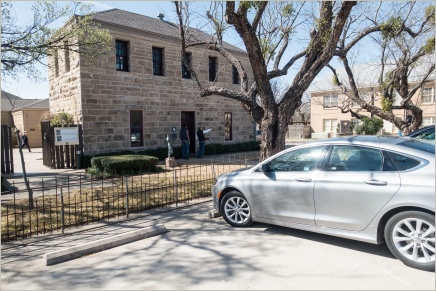 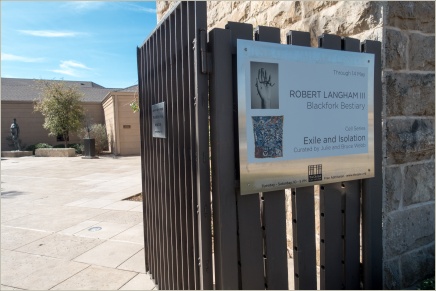 Upon leaving a studio the work will be compared to other work present in the gallery. The OJAC has a fine set of work. Not major, but certainly adequate for a small town to feel proud.

The Larger v. The Local

Artists acquire skill from those they engage. Some of this is formal, most of it is informal. The internet has provided, it is proclaimed, an enlarged world for the small town isolated artist. That isn’t the case for most photographers, since most photographers gather in tech specific forums. In those forums they must conform to a founders limitations which are reinforced by indoctrinated, accepting advocates. Robert Langham frequents these spaces, probably without benefit. Purposeful inbreeding isn’t an option for increased growth capacity.